After I resigned from my conventional, respectable-for-young-ladies job and before I left for overseas I worked in a fruit cannery. I did actually work there for a while before taking up my conventional, respectable-for-young-ladies job but that time I was an apricot cutter and this time I worked on the section of line where the fruit was inspected before it dropped into the cans. We stood for hours and hours picking out fruit which had been cut the wrong way, had marks on it or occasionally carried rude messages written by cutters further back up the line. That helped break the boredom.

The more reliable way to stop the relentless conveyor belt and give ourselves a few minutes break we discovered by accident. Back at the start of the line cutters sat with boxes of fruit at their sides and as they cut the fruit they dropped it onto a conveyor belt. The fruit continued on the belt down the line until it passed between two rows of workers who stood facing each other. The conveyor belt had a shuttered narrow section down the centre and that was where we dropped the damaged fruit which was diverted and sent to be made into jam.

Thousands of empty cans were fed along a wire channel which curved its way down from high above until it reached the end of the conveyor belt, from there it continued on to the steamers. After the fruit had passed by the “checkers” it dropped down into the cans, the last person in the line levelled the fruit in the cans before it continued on to where the syrup was added etc. Occasionally the line of cans feeding down would foul up and everything would have to stop until the maintenance man came along, scrambled up and used a wire hook to realign the offending can so the line would run freely again.

The little ploy we discovered was that by sneakily using a thumb to hold back one of the filling cans the smoothness of the can flow was interrupted and inevitably a jam would happen high up in the wire track. If we’d done it too often I’m sure the system would have been thoroughly investigated but as it was we managed an occasional break and a laugh with the very engaging maintenance man. 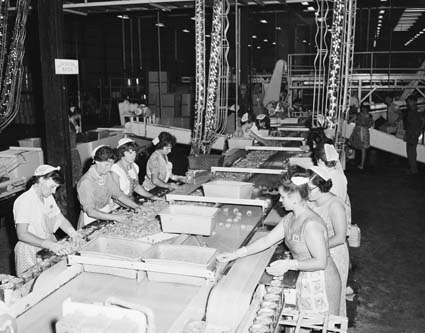 A slightly different setup but you can see how the cans feed into the system.