I’m grateful that my two dogs are only little Westies but they still manage to produce a lot of poo. I can’t bring myself to wrap it in plastic and put it in the bin so have been digging holes and burying it. We have very little flat ground and the “soil” is clay and shale in most places so digging big holes is very difficult. I’ve decided to have a go at making my own composter since the commercial versions, I think, are very expensive. I’ve searched online and lots of people seem to have success with home made composters so I’ll see how it goes.

It’s now about 8 months since I took the first photos and the mix seemed to be getting a bit high so with trepidation I did some digging around in it. I’ve been watering the bin to keep the mix palatable for worms but the side effect of that is roots have now invaded the bin. Today I decided to slide a spade around the edge of the bin to sever the roots then I decided to empty out some mix. I left the lid off for about an hour so that any worms would make their way down through the soil.

When I came back I was delighted to find that the mix had a nice fine crumbly texture with no hint of smell. Because I know what the mixture is made from I can’t bring myself to handle it but it looks just like compost from a commercial bag without the smelly lumps I’ve come across in them before.

I won’t be putting the compost on any fruit trees or vegies, there is plenty of dirt around my place desperate for a bit of humus. This is the first time I’ve managed to fully compost dog poo and I’ll continue with the bin as it is. I don’t know if the roots will become a big problem but will just have to wait and see, for the moment I’m very pleased.

We’ve been away on holiday for 5 weeks so nothing has been added to the composter in that time. I decided to empty it out again and there were more roots invading the bin but there were also thousands of worms. I used part of an old worm farm to try and separate the worms from the compost. The compost is just going on my flower beds and any worms that are in that should be comfortable in the garden though it’s not as moist.

As an experiment I think this has worked wonderfully.

A few of the worms.

Piling up the compost should encourage the worms to go down lower and into the bottom tray.

Part of an old worm farm sitting on a big lid. 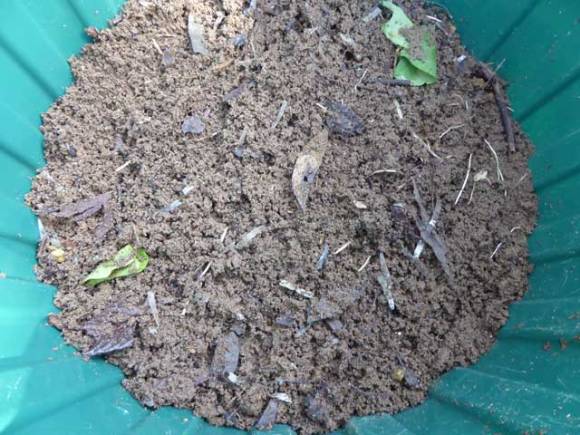 The undisturbed mix in the compost bin.