Like many young girls I liked horses and for a time I used to go out on trail rides through the swampland in an area probably just a bit south of where West Lakes now is. On a bit of ground an old man “Mr Gray” used to live in a caravan, not the modern type but more like a gypsy caravan, an old wooden one with steps up to it. In a circle around his caravan were low corrugated iron stables, not at all fancy, I think probably cobbled together from second hand sheets of iron.  There must have been about 10 horses. Nowadays,  if kids were going off to such a place alone everyone would be suspicious of the old man’s motives but as far as I know there was absolutely nothing untoward about it. We paid to go on a trail ride which he lead and I suppose he and his horses were able to live on the meagre proceeds.

Just about every weekend I used to hang around another place with horses, that was near the Breakout at West Beach. Girls agisted horses on the Breakout and on weekends they would gather together at the end of Military Road. I still remember some of the horses. Tiny was 16 hands high, an exrace horse and Rita (named after an actress, Rita Hayworth, a redhead) was a chestnut extrotter and I remember being doubled up on her as her owner tried desperately to get her to break into a canter. There was an old shaggy horse someone owned and you could hire it for the day,  * 10/-, I think.  One day I was lucky enough to be given the money to hire it and I had a lovely day with it. I snuggled up to its old neck and felt wonderful having a horse all to myself.

After my day hiring the shaggy, old horse I went home happy but later that night I scratched and scratched. Mum checked my head and said it was full of bugs, I had to get into the bath and have my head scrubbed then submerge myself under the water. It must have been powerful soap because it dealt a killer blow to the lice or whatever they were! After that I never felt tempted to snuggle up to the old horse again.

If you click on an image below it will change to a Slideshow with captions. 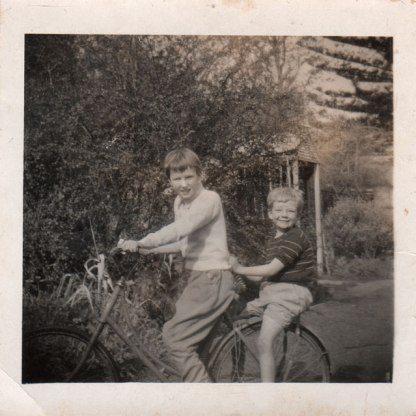 The “Oh So Classy” jodhpurs I used to wear when I went riding.

I was only about 4 in this photo. No idea where it was taken but not at The Breakout or Mr Gray’s.

I’m a sister, wife, mother, grandmother, auntie and friend. I prefer to be outside and am interested in photography, nature and different cultures. I believe everything on this earth has a right to be here but some things and some people would be happiest if their space was far away from mine. (Flies and biting bugs take note!) I don’t like housework and think dust is Nature’s way of saying, “This is my space, I was here first.” View all posts by macmsue