Throughout my school life I think I got a new pair of school shoes every year and they were nothing stylish. I liked it when I could stand with my feet in the XRay box and look at all the bones of my feet inside the shoes. Clarkes had a factory here in Adelaide and they were reputed to make the best shoes. The uniform for my secondary school had brown, laceups. Boring. Over the year though I became attached to my shoes, maybe because new shoes had to be “broken in” before they broke you!

Sometimes Dad would mend our shoes and I liked to watch him, he had a range of old cast iron shoe lasts and would put the shoe on one to work on it. When I was in Secondary school I decided I could mend my own shoes so I used to stop off in the city on my way home from school to buy a DIY pack from Coles or Woolies. Strong smelling glue was included in the pack along with two soles and little metal toe plates. I think there must have been a separate pack for heels. You had to roughen up the surface of the old sole, lay down the glue, attach the new sole then trim around it so it was a perfect match for the old sole. The toe tips had to be tacked on and I didn’t bother with them.

Heels were trickier. You had to remove the old heels then use shoe tacks to secure the new ones and I can’t remember if I managed that or not but since I don’t ever remember having holes in the soles of my shoes I can only think I somehow was just attaching the new heels over the old ones. It’s a wonder  I didn’t end up knock kneed.

You didn’t know that about Nana, did you? 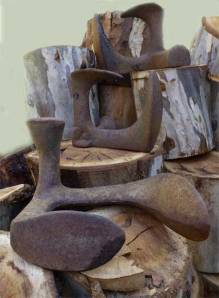