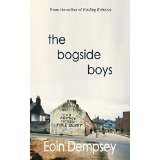 A couple of days ago I downloaded an ebook called, “The Bogside Boys” by Eoin Dempsey. I don’t usually read books about wars and fighting but it was free at the time and I’m glad I did. Apart from being a good book to read it has reminded me of 1972. The only reason I remember the exact year is that the book mentions, “Operation Motorman” an event which had great significance for many Irish and some for Alex and me.

After about 3 months holiday in France, Portugal and Spain we left Rota where we’d stayed trying to eke out our money. My last diary entry was that day, the 10th of July so I’m not sure exactly when we were heading back up the M6 to Scotland. We were hitch-hiking and our last ride was heading to Liverpool so they left us just off the motorway. It was getting late and we decided the best thing to do was to stop hitching for the day and find a place to sleep. There was a nice thick hedge lining the road and we were able to get deep into it which was just as well considering what happened.

We were sound asleep until we were woken by a phenomenal rumbling noise which came closer and closer until it stopped right opposite our sleeping spot. Neither of us moved but we could see big wheels and legs and then heard the unmistakable sound of someone peeing into the hedge. Eventually the rumbling started again, the convoy moved off and we went back to sleep. Just before dawn I was woken by the sound of rustling close to my head, opening my eyes I gradually made out the shape of a hedgehog snuffling its way along. Over the years the memory I’ve recalled most often isn’t of the soldiers on their way to Ireland as part of “Operation Motorman” but the little hedgehog just going about its business.