The bondwood-boat-that-weighed-a-ton was kept in the yard for ages upended over a trestle until the day Dad decided it was overdue for an outing. It was loaded onto the trailer and off we went to Aldinga Beach, south of Adelaide. There was no simple launching from a boat ramp instead there was a lot of manhandling and moaning before the thing was actually in the water. I think it was just Dad, Mike and me who headed out. Then the fun began. On the back was a small Model  40 Seagull motor, I’m certain of this because I recently found the ancient manual. The motor was attached to the boat with screw clamps but Dad took the precaution of also tying a rope around it.

After the obligatory multiple pulls the motor started and we headed out from the shallows, over a bit of a sandbar and into deeper water. I can’t remember the sequence of events but imprinted on my mind is the image of us going around and around in circles because the anchor was caught on something, the engine dropping off the back and into the water only saved from sinking completely by the rope and the boat quickly filling with water. The boards had shrunk from being out of water for so long and seawater was flooding through the gaps. Mike and I were frantically bailing with old jam tins when I heard another boater call out to Dad, “Are you alright mate?” and absolutely astonished when Dad coolly answered, “We’re OK, thanks”. I distinctly remember looking towards the shore and thinking, “I’ll never swim that far!”

We did manage to get the anchor up and the boat back to shore before any of us drowned but it was the last time I ever put so much as a toe in that boat. 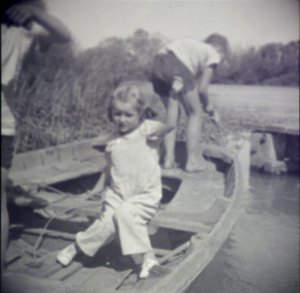 This photo reminds me of a couple of memorable holidays I spent  camping beside the River Murray. I think the first instance we were camped somewhere near Swan Reach and it was only my brothers, Dad and me. We had great fun out in the boat fishing and trying to catch yabbies. The weather was lovely and sunny, perfect for wearing shorts while sitting in the boat. Growing up I don’t ever remember people having any sunscreen though I did see some people smothering themselves with oil when we were at the beach. The result for me was by the end of the day my thighs were badly sunburnt. Dad put butter on my legs and it melted immediately, I’m not sure of the logic behind it but he wasn’t alone in thinking it was a good solution. It did nothing to soothe me but I had to try and sleep through at least another night before we headed home. Eventually the burns became scabs, it was the worst sunburn I ever had.

Another time it was just Dad, Mike and me camping out. We had the small bondwood boat which seemed to weigh a ton when it had to be manhandled into the water but we had some fun with it once it was launched. There was no motor at the time so Mike rowed it until he had the bright idea that we should use a tarp and an oar to make a sail. Somehow we managed to get the oar up and the tarp attached. It was great until the “sail” really filled with air and we couldn’t control it. The River Murray is notorious for hidden snags and deep holes which create whirlpools sucking unsuspecting swimmers under. I was terrified that we were going to end up in the water (Of course we didn’t have life jackets!) but luckily eventually Mike managed to regain control and sheepishly rowed us back to camp.

My worst experience with that boat deserves a post all to itself so that will have to come later!