We discovered a bottle of Mateus Rose in our cupboard, no idea where it came from but we do know it’s not the kind of wine that appreciates in value over the years so we drank it. They have such nice bottles which just cry out to be kept so I put it on the windowsill with some Ivy in it. Bingo! I had a flashback to the 1970s when just about everyone our age did the same thing when they left home and moved into their own space. Why Ivy? Well it’s tough and always seems to survive no matter how neglected it is. 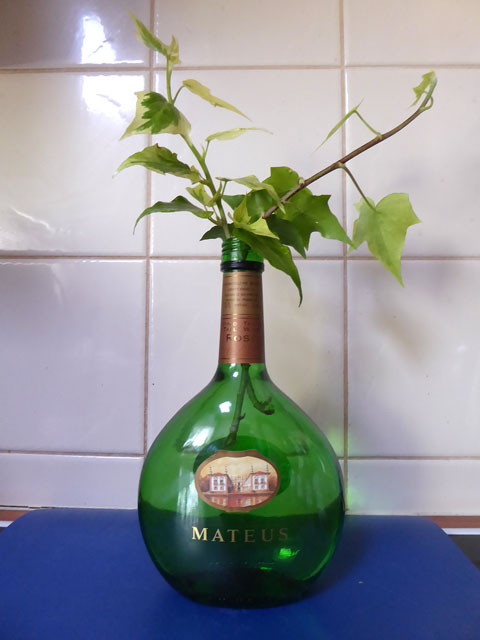 This photo of my 3 year old grandson eating an icecream cone reminds me that when I was little, cones like this one cost  tuppence ha’penny, normal sized single cones were 5 pence and the big adults’ double cones were 10 pence. There were twelve pence in a shilling and that became 10 cents in 1966 when Australia changed to decimal currency. That means you would get 2 of these little cones for a bit less than 5 cents, which sounds just absurd!

Getting an icecream when I was a kid was a real treat, if we were very lucky we’d get one when we went to the beach. It was always Amscol  Icecream – vanilla, chocolate or rainbow , usually rainbow. Our fridge at home didn’t have a freezer compartment so there was never any there. On special occasions one of us would be sent down to the shop to get a brick of icecream which came in a rectangular cardboard box and was wrapped in newspaper so it wouldn’t melt on the way home. With our dessert  we’d get a slice each. There were 7 of us in the family so there was never any left over to worry about and even the cardboard was licked clean!

Now there are just 2 of us and there are 3 different tubs of icecream in our freezer. None of it’s Amscol  because the company that started here in Adelaide in 1922 was wound up in the 1980s. Instead there is 1 litre of Caramel  Honey Macadamia, 1 litre of Café Grande and 2 litres of South Australian, Golden North Honey.

I must admit that I still like icecream just as much now even if it’s plain vanilla.