I started writing about Nana when I was involved in Blogging 101 a year ago and I’ve decided now it’s run its course. If I think of anything startling that just might make my grandkids gape in astonishment I might add it but until that happens it’s over folks. Thanks for reading. 🙂

I’ve been to possibly 20 different countries  and up through Central Australia maybe 6 times but last year was the first time I made it to Tasmania. When I was a teenager I never thought that would happen.

My first year of College I was delighted to discover there was a Travel Cub,  each year a trip was organised to somewhere in Australia and the rates were good. I joined the club and we had a great trip through the Snowies to Canberra, Sydney and Brisbane. I’m not sure I’d relish a bus, whoops coach, trip like that these days but it was fun then.

The following year somehow I managed to become responsible for organising the annual trip. Tasmania was the favoured place. I hand balled the job to Mum, she loved talking to people on the phone and organizing things!  The Art lecturer, John Bell, had previously organised trips to Central Australia and he was doing it again that year so two trips were happening. I thought about it and decided I’d go on the Central Australia one because I was absolutely sure I’d never tackle such a trip when I was older. Tasmania would be fine at any age.

The Tasmanian group stayed in Motels etc but the Central Australian group travelled by coach with a support, “Grub Truck”.  We slept in tents most nights although I do remember sleeping out under the stars at least once. That was the night after we went through Coober Pedy. Why would I remember that after almost 50 years? Because I bought some lovely dried apricots in Coober Pedy and really enjoyed them BUT  that night I had an urgent call. It meant getting out of my sleeping bag fast, in darkness, trying not to trip over any of the cocooned bodies lying about on the ground as I raced to find a “secluded spot”.

In 1965 there was no acknowledgment of Aboriginal land rights or even place names. We camped at “Ayer’s Rock” and climbed to the top to admire the views then visited “The Olgas”, I decided not to join the climbers instead I  stayed at camp and helped the cook.  After Ayer’s Rock we went on to  “Kings Canyon” travelling through Ernabella Mission lands.  People intercepted the coach and told us we had no right to be there,  somehow  we had “strayed” from the right road.  At Kings Canyon we walked all the way to the end of the canyon, some of us swimming and gasping in the freezing cold pool before climbing up to the cave in the end wall.

I’ve been back to all those places again but now I know the Aboriginal names, Uluru, Kata Tjuta and Watarrka and I respect the spiritual significance of the places to the Aboriginal owners. I don’t clamber over their sacred grounds anymore.

How average Australian college students looked in 1964 -maybe the one in shorts is skewing the average a bit. 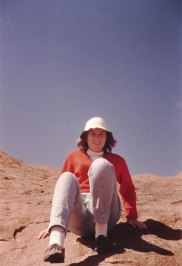 The best way to come down Uluru before the chains were put in which was before people were requested not to climb the sacred rock. 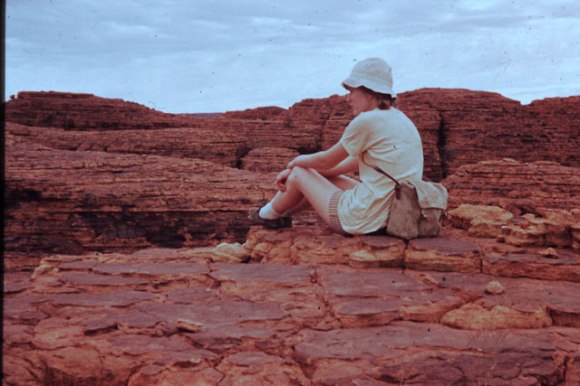