Along with manicures, pedicures, massages and hair colouring my grand-daughter is completely au fait with leg tans. My only experiment with leg tanning resulted in dark patches on my knees and ankles as well as yellow hands. My usual leg tan was the “pull up” type.

When I went to secondary school it was compulsory for us to wear 60 denier stockings. Not tights, stockings! Suspender belts are now considered racy things worn to titillate and often displayed in “Adult Only” shop windows but that’s certainly not how I remember them. I was slim and the only things that kept up my suspender belt were my hip bones. Not comfortable at all so when I discovered – horror of horrors – a girdle, I was happy. The whole thing was elastic so I no longer had to endure a belt cutting into me.

The 60 denier stockings were bad in summer but at least I never had to endure lisle stockings like one of my friends. They were some kind of knitted material and tended to sag around the ankles and knees. It didn’t take us long to discover we could get away with wearing 40 denier stockings, the uniform scrutineers at the school gates didn’t seem to spot the difference.

Sometime in the 1960s Pantyhose became available and that meant the girdle could be tossed out but along with pantyhose came a major issue for me. Sizing. As I said, I was slim so I didn’t think I needed “Large” or “Extra Large” but I soon discovered that buying “Average” meant that if they survived me pulling them up without ripping holes in them the crutch invariably headed straight to my knees as soon as I started walking. Buying “Large” often meant the waist band had to be rolled down so it didn’t extend to my armpits.

I rarely wear pantyhose now that women can wear slacks almost anywhere but I have discovered that they’re great under slacks when the weather is freezing.

I think pantyhose have now morphed into leggings and skinny jeans.

I know some people still prefer to go to a Bank or Credit Union to do their banking but certainly here in Australia in many instances that option simply isn’t available. It’s not only because of great distances but also corporate policy.

For years my pay was deposited in my bank account and I only received a little square envelope which had heaps of information printed on the inside. It told me how much I’d earned so far that financial year, how much Super I’d paid and tax etc but there was no hard cash. I had to go to the bank for that. Some people had to create bank accounts just so they could get their pay.

Before the Direct Deposits became the official system I used to get a cheque which I took to the bank to cash. I used to get actual notes and coins which I tendered for all my purchases and to pay my rent. When I first started working though I was paid cash, it was given to me in a little brown Kalamazoo envelope. On the outside was simply written my name and the amount of money enclosed. No way could I have dreamt that in years to come I’d be using a single card to pay for just about everything only really needing coins to make the Dog Wash work. 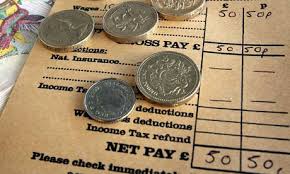