I need to have a rant! With much fanfare it’s recently been announced that NASA is to begin more exploration of Mars. You can see some images of this planet here:

In my backyard I’ve seen Springtails so tiny you’d fit a dozen on a pinhead, absolutely beautiful rainbow coloured beetles and an hours drive away giant Southern Right Whales playing with their young off Middleton Beach.

Earth is home to millions of different species of plants and animals BUT the species which claims to be the cleverest is the one fouling it for everything else. People have caused the creation of the Great Pacific Garbage Patch but it’s apparently “too difficult and too expensive” to clean it up. Not as expensive though as a little trip to Mars!

One country is prepared to spend over  $2.47 billion on an expedition to Mars, a planet that to me is less appealing than the most inhospitable place on Earth I’ve ever been. I wish that the billions being spent on nuclear weapons and space exploration was instead used to remediate the damage done to this incredible planet we live on now.

Irene Waters has suggested “weather” as a topic.

I grew up in South Australia, a place with a temperate climate, no snow, no cyclones. That means when I’m home I call a 12C day bitterly cold!

Every Christmas as kids we used to get new “bathers” and often a beach towel so we always hoped for hot weather then but I never liked extremely hot days. I remember staying at an auntie’s home one summer and she got sick of me being under her feet and insisted I go outside. I found a shady spot under a grape vine and stayed there. No one had air conditioning and heat waves were bad for me. Sprinklers gave us wonderful relief and at home we would play on the lawn running in and out of the long, bar sprinkler. In the evenings Dad would often take us to the beach. We also slept outside on the hottest nights.

I don’t remember rainy days though I do remember picking oranges covered in raindrops. In 1956 the River Murray flooded and we helped Dad fold empty hessian bags that were sent to be filled with sand to protect homes along the river. Once when I went down to the horse yards at West Beach the water trough was completely iced over. That amazed me so it must have been a rare thing. Hailstorms sometimes happened and seeing the ground covered in white always made us imagine it was snow.

During one of our caravan holidays we were at Merrimbula when there was a hailstrorm with hailstones the size of golfballs pelting down. I’d never seen any bigger than peas before.

Thunderstorms always caused a mixture of wonder and fear but I don’t remember anything dramatic resulting from one.

Last year I saw a post showing a delightful “Christmas Cactus” AKA Zygocactus. Mine is flowering now so I figure it must be one of those “Christmas in July” events.

I’ve just noticed this Rose in my garden and have no idea why it would have formed like this. Any ideas about what’s happening?

In January 2015 I was inspired to start a bottle garden after seeing this post by Woodland Gnome. I decided to go with a closed system because it’s a constant reminder of how our earth operates. Last week I was thrilled to see a little flower blooming in the mini-world.

The ecosystem in January 2015 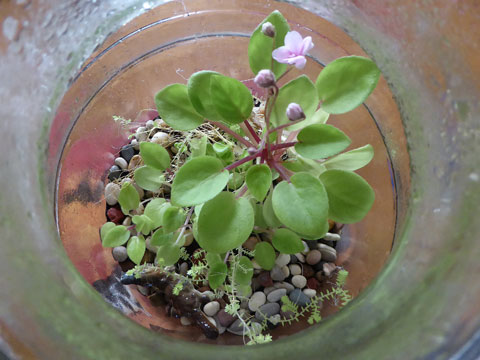 The first flower opened in February 2016

I think the difference in leaf colour is due to flash being used in the second photo but I’ll do some research on fertilizing in a closed system in case something is missing in the soil.

The weather was tooo hot for me again today, 39 deg,C this afternoon and I’m not the only one who’s had more than enough. I noticed this possum when I was out watering the garden this evening and it was so heat stressed it even allowed me to wet it with the hose. I started by misting it but then progressed to a gentle shower, at first it licked the water trickling down the stems but then licked it off its fingers and fur.

Tomorrow is forecast to be another 39 deg. day!

Last year my Strawberries did very well in a Wicking Box even though it leaked where I had the water level tubing but I was disappointed when Portuguese Millipedes kept getting to them before I did. I decided to make a tower using PVC pipe figuring they wouldn’t manage to climb up it. I had more than enough Strawberries for 2 towers but made one then decided to see if it worked before making the second one.

Now that there is fruit on the plants in Tower 1, I’ve made Tower 2. Even if the millipedes manage to climb up I’ll be able to see them easily and I can put a few snail bait pellets in the saucer where the dogs won’t be able to get them.

Musings of a Retiring Person
Blog at WordPress.com.