Thanks Irene for another suggestion. I’m a Baby Boomer and grew up in an Australian capital city.

Graduating or marking a significant milestone has become commonplace now. Last year I attended a grandchild’s Kindy Graduation evening but I don’t think anything was done to mark early progressions to higher grades when I was a child. At the end of Primary School we were awarded the, “Progress Certificate” if we passed. My report cards show marks so I suppose we must have been tested.

When I was attending Secondary School  the final Assembly for the year was a marathon event with the best reader in the class reading out the best essay and the person deemed the best at reciting her chosen poem performed that too. Every class at every year level was represented.

The third, fourth and fifth years of Secondary School were called, “Intermediate, Leaving and Leaving Honours”.  At the end of each year a dance was held for each of these year levels and as far as I remember that was the only “celebration” of another year being completed.  Being shy I didn’t enjoy the occasions at all.

The first actual Graduation  Ceremony of my own was when I received my Diploma of Teaching. All the girls had to wear white dresses and I guess the boys wore suits.  The ceremony was held at Bonython Hall on North Terrace, Adelaide. My parents would have attended but I don’t have any photos.

My next two awards I had posted to me and I didn’t attend the presentations but when I graduated again I wanted to inspire my children so I decided to attend the ceremony. They came to the Festival Theatre to watch, I think what they actually felt was that graduating ceremonies involve lots of speeches and hours of standing around! 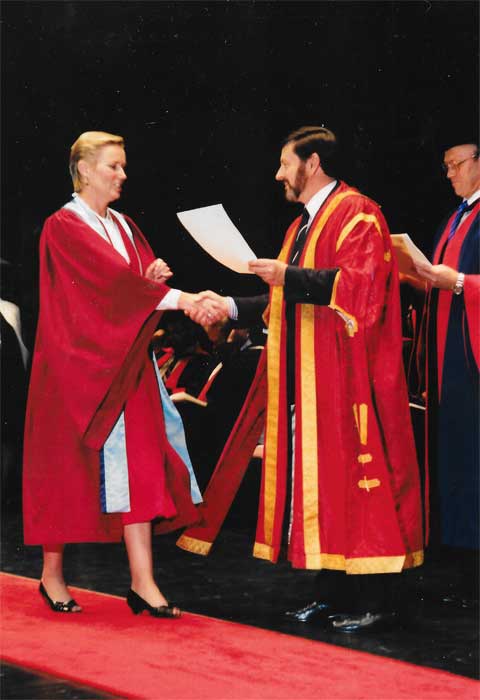 I’m a sister, wife, mother, grandmother, auntie and friend. I prefer to be outside and am interested in photography, nature and different cultures. I believe everything on this earth has a right to be here but some things and some people would be happiest if their space was far away from mine. (Flies and biting bugs take note!) I don’t like housework and think dust is Nature’s way of saying, “This is my space, I was here first.” View all posts by macmsue